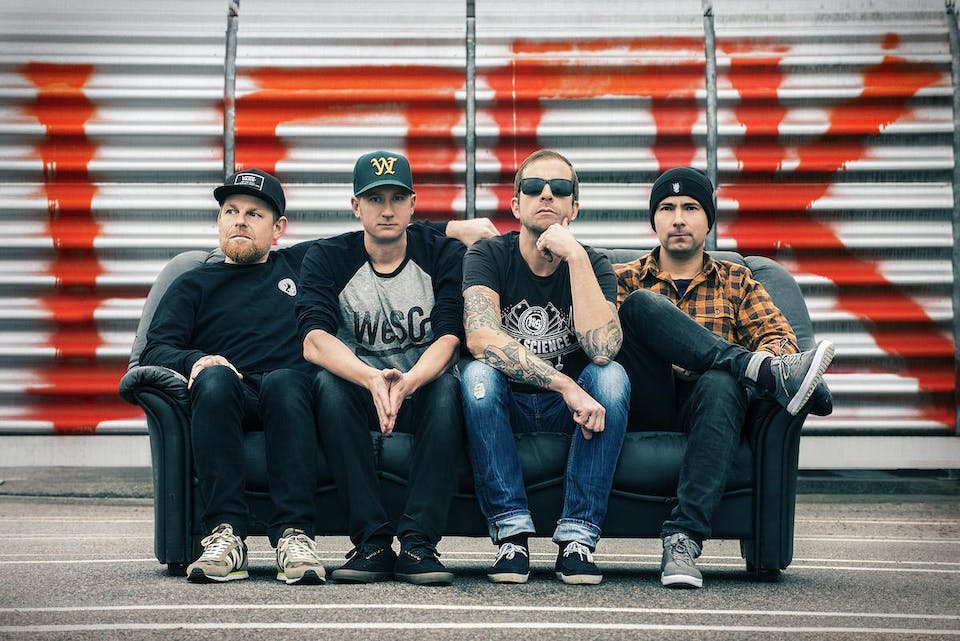 There’s no point in denying it: It’s been a long time since Millencolin have made a new album. Seven years, in fact. The Swedish skate-punk quartet’s last effort, the peppy Machine 15, kept them on the road playing to hundreds of thousands of diehard fans across the globe, as was its intention. But guitarist Mathias Färm says there was another reason for the time lapse. “We felt that it was important to have something really good to offer in terms of a new album,” he admits.

Färm and vocalist/bassist Nikola Sarcevic—the two men responsible for Millencolin’s songwriting for the past two decades and change—explored their other musical muses, with Sarcevic continuing to release low-key solo records and Färm starting a side band called Franky Lee, as well as producing other bands in Millencolin’s Soundlab Studios. Ohlsson continued exploring his interest in graphic design, and Larzon kept himself rooted in music by running a record label (De:Nihil Records) and a number of clubs in Örebro.

The quartet fused together all of these passions to create True Brew, out April 28 on Epitaph —an album self-recorded by the band, produced by Sarcevic and Färm in Soundlab Studios, mixed and mastered by Jens Bogren (Opeth, Soilwork, Katatonia, Paradise Lost) at Fascination street studios and with all artwork, photography and music videos created by Ohlsson. It’s clear the band members are just as unified as they were when they formed Millencolin, roughly 23 years, seven albums and 1,500 live shows ago. “We’re a band truly formed from respect and understanding for each other and our passion for rock music,” explains Sarcevic. “If you ask us, this is the best job in the world!”

And one listen to True Brew will tell you that Millencolin are back, they’re as strong as they’ve been in a decade or more and they’ve never lost that fire. “We tried to explore the ‘essence’ of Millencolin, what made us what we are and what influenced us when we grew up,” says Färm about True Brew’s writing process. “Since we started the band we have tried with every new record to explore new ground,” agrees Sarcevic. “If the other albums were going further away from where we once were, this one is digging deeper right down in the core of the kind of punk rock the once got us started.”

Don’t call it a throwback, though. While True Brew musically draws upon some of Millencolin’s earliest influences like Bad Religion through galloping drums and fast, technical riffing, the album lyrically tackles modern sociopolitical issues in ways the band never have before. Take standout track “Sense & Sensibility,” which Sarcevic wrote about the growing problem of nationalist and racist political parties in his native Sweden but could be applied to just about anywhere in the Western world. “During the weeks before the elections here in Sweden, there were so many ignorant comments being tossed around social media by ‘normal’ people that I just had to write this song as a comment on all that,” he explains.

True Brew isn’t all doom and gloom, however. The album’s title track is the kind of positive jam fans have come to expect from Millencolin over the years with a message that is universal. “It ́s about the struggle of finding freedom and control over your life and trying to live the life you want, no matter if it might be a bit against the grain,” Sarcevic explains. “The message is to follow your heart and be true to yourself rather than taking the road recommended by others.”

When it comes down to it, True Brew is the kind of album that sounds both timeless and modern, a record that could only come out of four adults who have been side by side since they were teenagers, who have weathered changing politics, shifting cultures and the rise and fall of all kinds of musical trends. Most bands never make it this far in their careers, at least not without a handful of ex-members, lawsuits and various skeletons in their respective closets. So how have Millencolin not only stayed together this long but continue to flourish creatively? “If you’re nice people like us, 20 years isn’t a problem,” Färm jokes. “The fact that we like and respect each other is probably the strongest glue,” agrees Sarcevic. “What we hope for now is that people will dig the new album!”