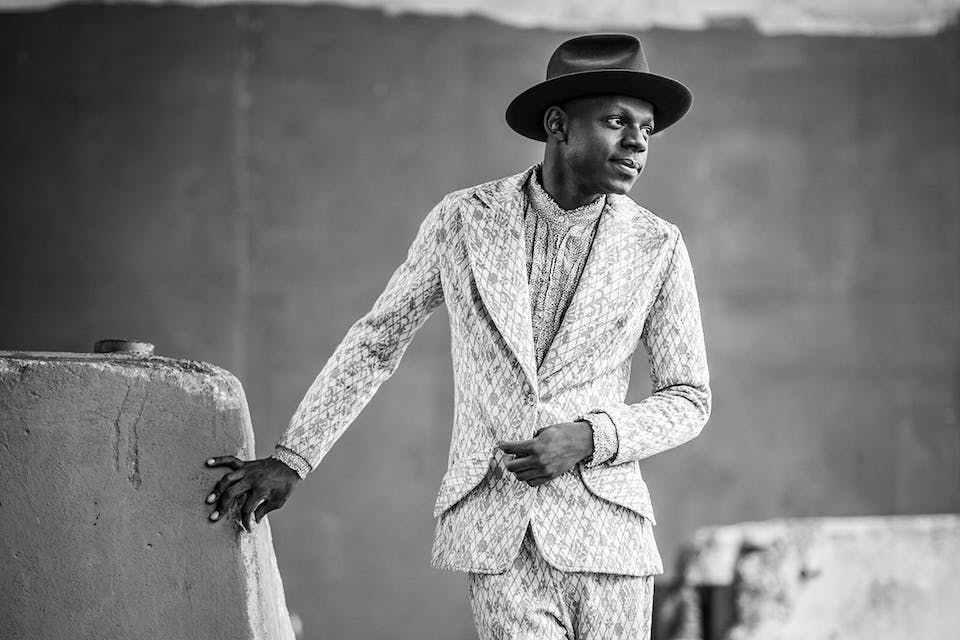 J.S. Ondara offers a unique take on the American dream on Tales of America, his debut album. Ondara grew up in Nairobi, Kenya, listening to American alt-rock and making up his own songs for as long as he can remember. After discovering the music of Bob Dylan, he moved to Minneapolis in 2013 to pursue a career in music. There he began making his way in the local music scene, continually writing songs about what he saw, felt and experienced in a place far different from home.

From a stockpile he says is hundreds of songs deep, Ondara chose 11 for Tales of America. They're captivating tunes built around acoustic guitars and adorned with subtle full-band accompaniment for an openhearted folk-rock feel. He sings in a strong, tuneful voice well-suited to the gorgeous melancholy he expresses on the wistfully lovelorn "Torch Song," or his steadfast infatuation on "Television Girl." Ondara sings rueful lyrics in an anguished tone on "Saying Goodbye," and leaves plenty of room for interpretation on "American Dream," the first single.

His persistence is evident throughout Tales of America, which is indeed a classic American tale. It's the story, told in song, of an immigrant seeking a new life, who dedicates himself to achieving his vision through hard work and determination.

When did you begin learning English?

I had studied it in school, so when I'm speaking it, I'm just assuming I'm in a class. I don't know how good I am at it, but I think it's like when you study any other language as a second language: you grow into it over time. I think listening to a lot of Western music and watching a lot of movies, stuff like that, helped inform my vocabulary.'

How big of a challenge is writing song lyrics in a second language?

I think I just naturally wrote songs in English, because the songs I first fell in love with were in English, and were Western songs. Jeff Buckley songs were some of the first songs I ever started singing. I didn't necessarily know what I was saying. I just sang them because I thought they sounded cool to me, and as I grew up

I started understanding, "Oh! That's what that word means." My sister had brought home a mix-CD that had some Nirvana songs, some Pearl Jam songs, some Jeff Buckley songs, a bunch of rock music, and I was like, "This is so cool." I have memories of listening to "Smells Like Teen Spirit" and singing the words completely wrong.

You're self-taught as a singer, songwriter and guitar player. Would you ever consider lessons?

There's a magic about just fooling around and finding it. When I'm just holding my guitar and I'm putting my finger here and then there and then, "Oh, wow, this is cool. Maybe this sounds like a song, it sounds like a chord." Or when I'm free-writing in my journal and I come up with a string of words that sound like a song. I appreciate the magic about it and I'm sort of afraid that I'd lose it if I study how to write songs or how to play guitar, how to sing.

How has living in Minneapolis shaped you as a songwriter?

The thing about Minneapolis is that it's low-key, so I had time to grow and find my actual voice and find the songs that I wanted to put out to the world, slowly. There was no one trying to turn me into a particular thing. If I had moved to a place like Los Angeles, or New York, then it probably would have been a little frustrating with all the people saying, "This is what you should do." I maybe wouldn't have had time to learn the guitar, because I couldn't really play guitar when I moved here. So I think it offered me this security of a place to grow at my own speed.

You started out with around a hundred songs you were considering for this album. How did you narrow it down?

So the title has stuck with me for a long time -- it came before the songs. I don't usually write with an idea in mind, but when I looked at what I had written, I was like, "Oh, there's this sense of a theme, of what this particular record is about."

So are these songs about America, or about being in America?

Are there specific things that inspire you to write?

It's everything really. It's film, it's other records, it's a river, a lake, it's the sky. It's where I am at the moment: cities, and all kinds of things. Anything can inspire me at any particular point.

How do you keep yourself open to it all?

Just by being present really to every moment, being present and being open to accepting new experiences, and then taking time to document these experiences through your own perspective. So it's like you take this experience and you sort of compare it to your other experiences and turn it into this story that ends up being a song.

"Round here, you can be however you wanna be," Elise Davis sings at the end "33," one of 10 self-empowered southern anthems from her newest album, Cactus.

Released two years after The Token -- Davis' 2016 debut, whose electrified roots-rock sound earned praised from outlets like Rolling Stone Country, Noisey, and The Wall Street Journal -- Cactus shows the full range of her songwriting. Here, she moves between lush alt-country and stripped-down folk confessionals, gluing everything together with story-driven songs about independence, liberation, and resilience as an adult woman. If The Token's own songs were vulnerable and diary-like, their lyrics pulled from Davis' past romances, then Cactus turns a new leaf, with Davis taking pride in her status as a single, self-sufficient adult woman. Like the desert plant that lends the album its title, she doesn't need help from others to grow tall.

"Cacti are independent plants that sustain themselves," she explains. "They can be beautiful with bright-colored flowers on them, but if you touch them, they will hurt you. I see a lot of parallels with the way I have felt most of my life. It felt like the perfect album title for these songs."

Davis' independent streak began in Little Rock, Arkansas, where she began writing songs at 12 years old. By college, she was booking her own tours and gigging regionally across the state. It was her relocation to Nashville that kickstarted the busiest phase of her career, though, with Davis landing a publishing deal during her first two years in town. Daily co-writing sessions whittled her songwriting to a sharp point, while an ongoing string of recordings -- including The Token, recorded in Maine and released in partnership with Thirty Tigers -- all showcased a musician who shone just as brightly onstage as she did in the writing room.

When it came time to record Cactus, Davis remained in Tennessee, tapping producer Jordan Lehning (Rodney Crowell, Caitlin Rose, Andrew Combs, Birdcloud's Jasmin Kaset) to helm her most personal work to date. The two worked together for six months, holed up in Lehning's home studio, looking to albums like Tom Petty's Wildflowers and Aimee Mann's Mental Illness for inspiration. They paid tribute to Davis' adopted hometown, too, layering songs like the woozy, western "Hold Me Like a Gun" and the cathartic "Don't Bring Me Flowers" -- the latter co-written with Grammy-winner Maren Morris -- with pedal steel, acoustic guitar, keyboards, strings and vocal harmonies. Davis' melodies remained at the forefront of every mix, her voice honest and unflinching, stripped free of the reverb that had swirled its way throughout The Token.

A bold, country-leaning album, Cactus never pulls its punches. Davis examines long-term monogamy and loneliness with "Lone Wolf," "Hold Me Like A Gun," and the album's percussive title track, then talks frankly about sexuality during songs like "Man" and "Don't Bring Me Flowers." She tackles the institution of marriage -- as well as the societal misconception that women should be married by a certain age -- on "33" and "Married Young," then looks at wider issues like depression ("Moody Marilyn") and climate change ("Last Laugh") during the album's second half.

Together, Cactus paints the picture of a modern woman in the modern world. It's an album about what it takes to stand alone, rooted in the hard-won wisdom of a songwriter who's unafraid to shine a light on her missteps and victories.