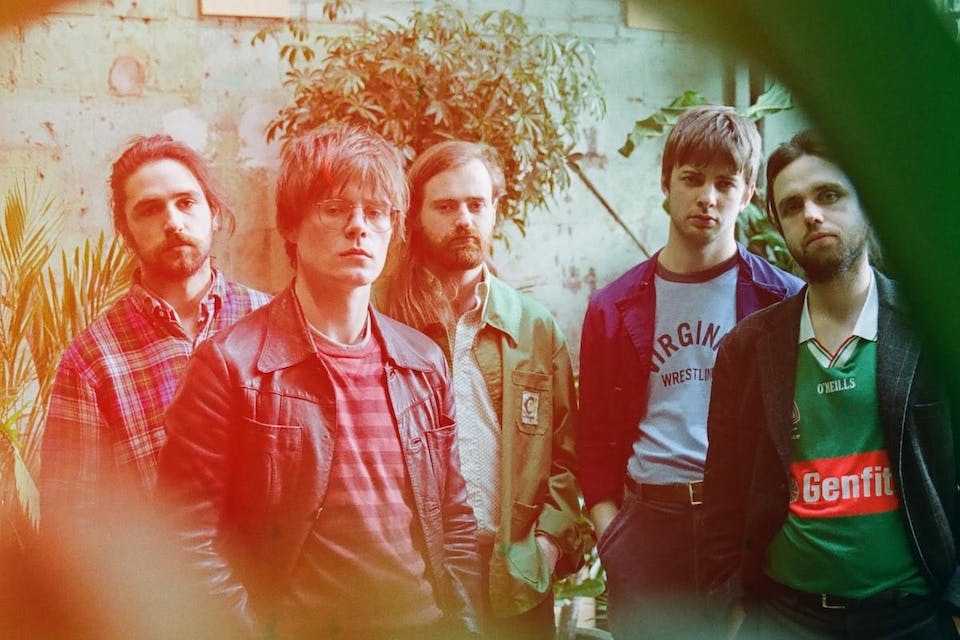 “We were encouraging each other to be who we believed ourselves to be all the time” - Grian Chatten, lead vocals, Fontaines D.C.

With the best bands, it seems to happen fast. The trajectory is steep, the progression seemingly preordained, inexorable. Assembling whilst still at college in Dublin a mere three years ago, from the ruins of early nowhere bands, and having discovered a shared love of poetry and a common zeal for authentic self-expression, the evolution of Fontaines D.C. has been swift, sure and seemingly effortless. Three self-released seven-inch singles (the first of which, “Liberty Belle,” emerged in May 2017) each a confident step onward from its predecessor, and a relentless schedule of live shows have seen them progress at a prodigious, yet wholly logical pace. Through around 200 dates in the UK, Europe, and the US, one word has kept resurfacing in their characteristically eloquent yet direct interviews: authenticity. “I think there's an authenticity to what we do, and people have been starved of authenticity for too long,” Chatten said in one early Irish radio encounter. Not youthful bravado, but a truthful reflection of the shared code that has guided these five young best friends thus far, with what has occasionally seemed a preternatural combination of insouciance and self-belief. This commitment to the authentic, in their music and in each other, is key to understanding the Fontaines D.C. aesthetic. In the course of “going round bars, drinking and writing poetry and romanticizing it to bits,” according to bassist Conor Deegan, the band pushed each other to create, always keeping a collective eye on keeping it real. “We’d call each other out” Chatten has explained, adding, “through each other, we found ourselves a lot quicker.”

Alongside this commitment to each other and the shared goal, another overarching formative dynamic was at work: Dublin City itself; more specifically, the disappearing Dublin embodied most readily in their immediate surroundings, the old working-class neighborhood known as The Liberties. As with so many of our cities, the modern malaise of gentrification is steadily claiming vast swathes of the Irish capital. Sure, that's progress, but the underlying cultural cost of this air-brushing of an environment is something that has preoccupied Chatten, feeding into much of the Fontaines’ lyrical content, and indeed the early singles' artwork which featured long-gone, semi-mythical figures like Bang Bang and Forty Coats, real-life quasi-Dickensian characters, legendary in their own time but now becoming lost in the city's fading folklore. Chatten speaks of writing about “the dying romance of the city...the reason we love the Liberties is that seems to be where a lot of that action is happening,” It would be a mistake to view this as some sighing nostalgia, however. Rather, it speaks to the place of Fontaines D.C. in a broader Irish cultural lineage: the bloodline that is more Behan than Bono, evoking poets such as Kavanagh and Lynott, Chevron and MacGowan and yes, even Joyce in the expression of the universal and profoundly human experience through the prism of the local, the familiar, the real. As Lou Reed did with New York, or Ray Davies with London, or indeed The Smiths with Manchester. Write what you know, as the old advice goes. Or, in the words of guitarist Conor Curley: “From talking to these guys about literature, I saw Irishness as being easily romantic about what you see.”

It's a through-line that can be discovered in all the best of Irish art, whichever the medium, and the band's intent is drolly embodied in the album's knowing title: Dogrel. To give it its dictionary definition (or close enough for now): crude verse of little artistic worth. The ribald rhymes of the docks, the factories and the early houses. The authentic poetry of the people, which any smart Irish poet knows it is foolish to think oneself above. For in it all is an ineffable beauty, something these young men understand very well.

Not that Dogrel isn't rock and roll; it most assuredly is, the best example of the form that you are likely to hear this or any other year. It spits, it snarls, it snaps with the very best of them. But also it yearns, like the greatest Irish music must do. In songs like the almost unbearably sad “Dublin City Sky” there is a marriage of the lyrical to the poetic tradition that bears comparison not just with MacGowan's (the Pogues) best work but echoes the exquisite heartbreak of Luke Kelly's timeless reading of Kavanagh's “On Raglan Road.” This is an example of one of the great strengths of Dogrel; its diversity makes it feel less like a debut and more like the work of a band who have long since proven their point, as I suspect Fontaines D.C. may well feel that they have; to the very people who matter above all: each other.

From the short, sharp opener “Big” (surely rivalling “I Wanna Be Adored” as an irresistible opening statement of self-confident intent) the album delightfully surprises at every turn. The singles sit fully at ease along much more complex, emotionally loaded pieces such as “Roy's Tune” and “The Lotts,” both examples of a bruised but unbowed melancholia which is the record's true genome. “Television Screen,” shares its title with the first ever Irish punk single (by The Radiators From Space featuring future Pogue and another of the great chroniclers of old Dublin Town, the late Philip Chevron) and it is a different beast again: melodic and stately, it's a perfect example of the untimely, almost unnatural maturity that this band has already attained. “Boys in The Better Land,” in another twist, perfectly captures the spirit of the album's title. Among a blizzard of evocative couplets, “He spits out 'Brits Out" and only smokes Carroll's,” stands out as great a pencil portrait as you'll find anywhere. That Lou Reed thing again.

As a band, Fontaines D.C. are on fire throughout: witness the brief, urgent mechanical grind of “Chequeless Reckless,” which perhaps comes closest to a Fontaines D.C. manifesto: "A sellout is someone who becomes a hypocrite in the name of money. An idiot is someone who lets their education do all of their thinking. A phony is someone who demands respect for the principles they affect. A dilettante is someone who can't tell the difference between fashion and style. Charisma is exquisite manipulation. And money... is the sandpit of the soul.” Spat out by Chatten with palpable contempt, they are words that could come back to haunt him, but he's smarter than that, and anyway, somewhere Mister Wilde is wryly smiling.

Dogrel is a debut which is best enjoyed as a whole; it is very much in the grand tradition of the album as art form, just as this is a band very much in the classic band mold: great singles, an indefatigable work ethic and an utter aversion to standing still.

Reluctant to be viewed as part of any wider movement (“I get a bit uncomfortable with some of the comparisons that have been made,” says Chatten, as he must, though they inevitably shall be) Fontaines D.C. have delivered on their tremendous promise in a way that few bands have. It is to their credit and it augurs well that their collective eye is already on the next phase as they prepare for now to merely take on the world for real. Too real.